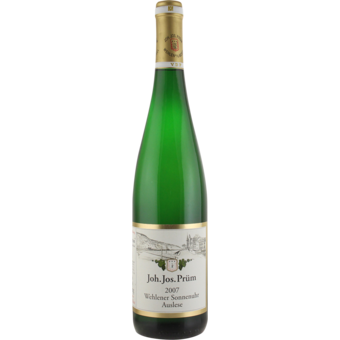 "Joh. Jos. Prüm needs no introduction to Riesling lovers, having already become a Mosel icon during the nearly five decades during which its namesake’s son Sebastien was in cha...

"The 2007 Wehlener Sonnenuhr Riesling Auslese Gold Capsule is proof that – 40 years after the Summer of Love – Flower Power is still a viable concept, at least chez Prum. Sweetly perfumed gardenia, decadent lily, bitter-sweet iris ... all cavort in a matrix of apple and quince preserves, vanilla and lemon cream, honey and white raisin. And for all of its richness, sweetness is the last thing on your mind while this wine is on the table. I imagine you could simply inhale its entire, vast sensual contents, so ethereal is every aspect of it. And if that doesn’t get you high, then you’re no Mosel wine lover!

The characteristics of great Riesling from the Prum estate coincide with one of the most striking virtues of 2007 Mosel Rieslings in general, namely the ability to combine intensity of aroma and flavor with delicacy, and caressing richness with vivacity. In a sense, the best wines in this year’s collection are like Prum-squared in their distinctiveness and expressivity. Manfred Prum acknowledges good reasons for the widespread comparison of 2007 with 2004, and thinks the present vintage also shares the richness of 2005. Notoriously little attention is paid at this address to dry-tasting wines, and I was unfortunately not able to taste either a Zeltinger Sonnenuhr Spatlese trocken or a Bernkasteler Badstube Spatlese feinherb. Nobly sweet wines which I have not yet tasted include Wehlener Sonnenuhr auction Spatlese, gold capsule Auslese, and Beerenauslese; a Graacher Himmelreich long gold capsule Auslese, and a Bernkasteler Badstube Eiswein."

"This non Auction Auslese GK shows (for a botrytis affected GK) a surprising light, almost green colour and has a bit of CO2 on opening. This bottle is no exception to the 2007 Prüm portfolio and the nose shows at first some reduction that could turn off some tasters which are not familiar with the Prüm wines. As we expected, with extensive airing, the wine starts to reveal wonderfully fresh and juicy flavors of white flowers, grapefruit and peaches with a hint of mint. The botrytis is very clean, precise and incredibly transparent, which allows the slatey side of the wine to come through at this early age. The wine shows great play and texture on the palate: there is a light and comfortable feeling of creaminess with citrus zest and apricot flower. The finish is very long with a delicate spiciness and superb freshness."

"Joh. Jos. Prüm needs no introduction to Riesling lovers, having already become a Mosel icon during the nearly five decades during which its namesake’s son Sebastien was in charge. Katharina Prüm has been active alongside her father, Manfred, since early in the new millennium, and the two of them perpetuate a house style that has itself become a Mosel archetype: wines of delicacy and restrained sweetness, often strongly marked in youth by yeasty and otherwise fermentative aromas, and tingling with dissolved CO2. Their longevity is legendary, and the Prüms personally don’t care to drink their own wines – even the Kabinetts – with less than a dozen, and usually many more, years in bottle. The aromas of youthful Prüm wines make it obvious that fermentation here is entirely spontaneous. Manfred makes no secret of his longstanding disinterest in legally dry wines. These are uncompromising, benchmark Mosel wines.

The Wehlener Sonnenuhr vineyard has become intrinsically attached to the name of Joh. Jos. Prüm. The estate owns five hectares of this majestic site. It offers perfect growing conditions for the Riesling grape with its deep, weather-beaten grey slate soil, good water support, extreme steepness of up to 70% gradient, and its optimal south-south-west exposure. Wehlener Sonnenuhr is named after the sundial erected in the vineyard in 1842 by Jodocus Prüm, an ancestor of J.J. Prüm, to give the workers a better time orientation. The wines of the Wehlener Sonnenuhr possess excellent structure, show beautiful, ripe aromas and flavors (typically stone fruits), a fine minerality, and great depth and length. After having been aged for some years, the harmony, finesse and expression of these wines is unique. Stuart Pigott writes “Joh Jos Prüm’s Sonnenuhrs are classic examples of the way in which the best Mosel wine’s natural sweetness magnifies, rather than obscures, their character.”
-- Winery