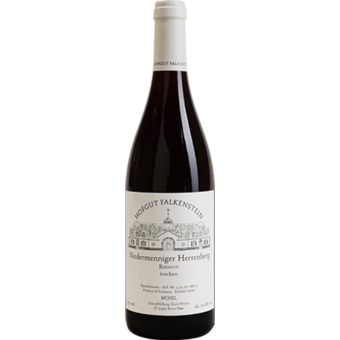 Erich Weber of Hofgut Falkenstein makes ultra-traditional, dry-tasting Saar Rieslings. He likes to call himself “Winzer Weber.” (Winzer is German for winegrower.) In other word...

Erich Weber of Hofgut Falkenstein makes ultra-traditional, dry-tasting Saar Rieslings. He likes to call himself “Winzer Weber.” (Winzer is German for winegrower.) In other words, the emphasis is on the work in his vineyards, where he spends most of his days. With his tan and rugged face, he looks the part, too. Since his middle son, Johannes, has joined him full-time, there has been more of a focus on Rieslings with residual sugar. In recent years, their wines have also caught the attention of critics, both in and outside Germany.

Hofgut Falkenstein has about 9 hectares planted in and around the village of Niedermennig. Like Erich, Johannes studied at Geisenheim. He also went to technical school and has taken on a bigger role in the cellar and vineyards. Erich's youngest son, Paul, and his eldest, Franz, also help out when they can, especially during the harvest. The vineyards, all in what is called Tälchen ("little valley"), are on various slate slopes in Falkensteiner Hofberg, Niedermenniger Herrenberg, Niedermenniger Sonnenberg, Krettnacher Euchariusberg, Krettnacher Altenberg, and Oberemmeler Karlsberg.
-- Importer