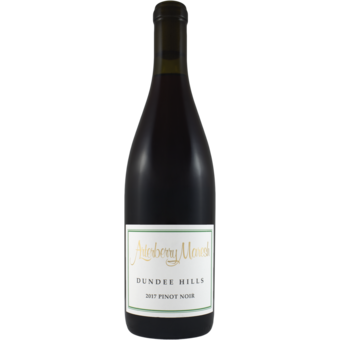 "Jim Maresh is Oregon's first, third-generation winemaker. His father, Fred Arterberry was behind the famous Arterberry Cellars label of the eighties. The Maresh Vineyard was p...

"Jim Maresh is Oregon's first, third-generation winemaker. His father, Fred Arterberry was behind the famous Arterberry Cellars label of the eighties. The Maresh Vineyard was planted by Jim Maresh's grandparents, beginning in 1970, the fifth planting of Pinot Noir grapes in the state. These earliest blocks are self rooted Pommard and Wadensville clones. The vineyard is organically, dry-farmed and sits in a very choice part of the Dundee Hills. To say that it would qualify as a, or perhaps "The", "Grand Cru" of Oregon relates only to "Just the facts, Maam". Some years ago I became aware of the singular nature of these vines and the fruit they produce and sought out the wines from them. As time marched on the wineries lucky enough to get some became fewer and today, the only company in NY that can supply you a wine made from these grapes is Artisan Wines. So you are not likely to hear about it from anyone else in the market. Vines this old also produce very little so there is just not that much of the wines either. After Jim relaunched the family label, originally known as Arterberry Cellars , now adding Maresh to the name, he would re-absorb many of the grape contracts as they expired to add to his own production. These wines along with Kelley Fox are the only wines in NY that are exclusively made from this truly great vineyard.

The winery focuses only on old vine plantings from the Dundee Hills, and those specified on the section of Worden Hill Road where the Maresh Vineyard sits squarely in the middle. From D. Schildknecht in the WA,-" a stretch brought to prominence as a source of Pinot by his still viticulturally active mother and late father Fred Arterberry Jr. (whose original label design has been replicated), and now rightly recognized as a veritable rue des grands crus, one along which grew an amazingly high percentage of the best Oregon Pinots I have thus far experienced. And their numbers were swelled on the June occasion of my first tasting with Jim Maresh." If the last few WA and IWC reviews putting Jim at the top of the qualitative heap in OR were not enough, the release of his 2011's marks the single largest leap forward in quality this winery has achieved. The 2011's were actually the first wines made entirely in his own newly built cellar. Also for the first time, there is zero press fractions, only free run juice. The seamless elegance that these wines have presented so beautifully in the past is hugely amplified if one can even imagine that!" - Importer