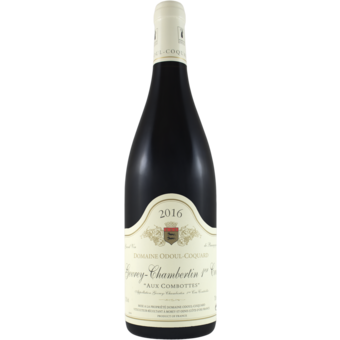 "A complex, fruity, slightly floral and spicy wine with long and expressive tannins and a nice character. Great aging potential. Domaine Odoul-Coquard was founded in the ear...

"A complex, fruity, slightly floral and spicy wine with long and expressive tannins and a nice character. Great aging potential.

Domaine Odoul-Coquard was founded in the early 20th century and remains family owned and operated. Sebastein Odoul, fourth generation, gained in-depth experience in winemaking by working at Domaine Dujac, Mommessin, and Domaine Denis Mortet. In 2004, he returned to the family winery to join his parents, Sylvette and Thierry. As of 2009, he took over as winemaker of the domaine.

Situated in Morey-St.-Denis, in the prestigious Cote de Nuits region of Burgundy. From Gevrey-Chambertin to Nuits-St.-Georges, the Odouls own 9 hectares of vineyards in 21 different appellations throughout the Cote de Nuits. Most notably, they own the majority of the lieu-dit vineyard of Las Crais Gillon in Morey-Saint-Denis. All of their farming is done with lutte raisonée sustainable viticulture practice. The family follows traditional Burgundian winemaking practices, while showing optimal respect to vintage. All grapes are hand harvested, sorted, and destemmed.

The winery ages their wines in barrel for an average of 15 months with the Bourgogne seeing no new wood, while Premier Crus will sees up to 50% new wood, and Grand Crus, 50% and 90% new wood. The domaine uses Francois Frères barrels, with a few testers from other coopers. Domaine Odoul-Coquard has continued to evolve and pursue the highest level of quality, while also maintaining tradition." - Importer