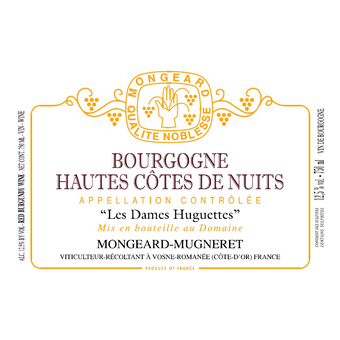 "Thanks to the fruit of the Pinot Noir and the youth of the vintage, Hautes-Côtes de Nuits wines delight the palate of the informed wine taster. With a steady and brilliant col...

"Thanks to the fruit of the Pinot Noir and the youth of the vintage, Hautes-Côtes de Nuits wines delight the palate of the informed wine taster. With a steady and brilliant color, this wine offers a palette of heady aromas nuanced by red and black fruit. In the mouth, it astonishes with not only its length and power, but also with its fineness and generosity. In all circumstances it will accompany Burgundian cooking, but it can also surprise when paired with an inventive cuisine, such as a scented beef carpaccio or lamb mignon with a coriander crust."- Winery The Mongeard family arrived in Vosne-Romanée in the eighteenth century, with records showing a Mongeard working as vigneron for Domaine de la Romanée-Conti in 1786. In 1945, Jean Mongeard, whose mother was a Mugneret, found himself making wine at the age of 16 in the place of his father who had died years earlier. The entire 1945 crop was purchased by Baron le Roy, Marquis d’Angerville, and Henri Gouges. Gouges instructed the young Mongeard to personally bottle the wines, rather than sell in barrel. In 1975, Vincent Mongeard, Jean’s son, began working alongside his father and became responsible for viticulture and vinification of the domaine wines. He persuaded his father to return to the traditional method of bottling, without filtration, filtering only with certain vintages. Jean Mongeard retired in 1995, and Vincent assumed complete leadership of the domaine. Today, Domaine Mongeard-Mugneret covers a total area of more than 75 acres, split among 35 appellations. The varied range of climats in which the Mongeards own vineyards results, naturally, in wines of great diversity.