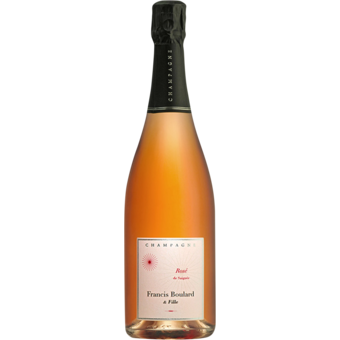 "Delphine Boulard is the seventh generation to work her family's land in Champagne and now fully at the helm of the estate she founded with her father Francis in 2009. Prior to...

"Boulard's NV (2013) Rosé de Saignée is fabulous in the way it balances fruit richness and transparency. Bright red fruit, mint, chalk and white flowers are all beautifully lifted in a finely cut, sculpted Champagne that dazzles with its energy and tension. Dosage is 2 grams per liter."

"Delphine Boulard is the seventh generation to work her family's land in Champagne and now fully at the helm of the estate she founded with her father Francis in 2009. Prior to founding Francis Boulard et Fille with Delphine, Francis worked alongside his brother and sister running the now defunct family estate Raymond Boulard. The winery created a reputation for itself by highlighting the distinct terroirs of the three areas it worked: the rich clay soils of the Marne planted in Pinot Meunier, Chardonnay from the silica-limestone soils of the Massif de Saint-Thierry and the Pinot Noir of Mailly (the two latter being subsections of the Montagne de Reims).

Francis claimed his three hectares of vines, broke off from his family and started his own estate. His daughter Delphine, who had been working alongside her father at Raymond Boulard for nine years, decided to follow him and together they founded Francis Boulard et Fille in 2009. The estate is certified organic and worked with biodynamic preparations, a rarity in Champagne. So much so that large signs had to be installed in the vineyards so that helicopters can see which plots to avoid while dumping chemical products on the vineyards. It may be hard to believe, but this is a common practice in Champagne; a law passed in the early 2010's forbidding helicopter treatments within 120 meters of organic vineyards! Another poignant example: of the 400 hectares planted in the Vallée de la Marne, only 3.2 are certified organic. The Boulard own 1.2 hectares of that land."'
-- Importer