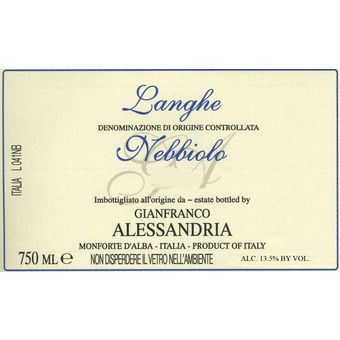 "Gianfranco Alessandria took over managing his family's farm in 1986, after the passing of his father. He continued the practice of selling the grapes from the 5.5 hectares of ...

Here's another pretty wine in this terrific lineup from Gianfranco Alessandria. The 2018 Langhe Nebbiolo does not lack for fruit, because the bouquet is vibrant and fresh with raspberry, cassis and a touch of sweet peach. There are light shadings of smoke, ash and white pepper. The mouthfeel is lean and streamlined, but this handy Nebbiolo would make a fine partner to a classic pasta with meat ragù. I absolutely recommend this wine. Some 5,500 bottles were made.

"Gianfranco Alessandria took over managing his family's farm in 1986, after the passing of his father. He continued the practice of selling the grapes from the 5.5 hectares of vineyard land his father had amassed in San Giovanni, home to some of Monforte d'Alba's best known vineyards. At the end of the 80's, at the urging of his cousin, Mauro Veglio, he began to bottle small portions of his wine.

The first Barolo came with the 1993 vintage which was awarded three glasses by Gambero Rosso.

The new winery, attached to their home, was finished in 1996, also the first year of full production. While modernizing the facilities refined the process of the wine-making, it did not change Alessandria or his heart-felt belief in the land of Monforte d'Alba.

All the wines are aged in neutral oak, with the exception of the San Giovanni, which sees a small percentage of new barrels. Gianfranco produces approximately 35,000 bottles each vintage of stunning wines with great integrity." - Importer