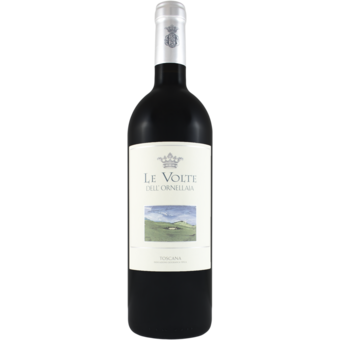 No one needs an introduction to Ornellaia, a Bordeaux-blend and one of Italy’s greatest wines. But some explanation about Le Volte is important since even Ornellaia’s website reveals few details of this wine. Ornellaia took a giant leap in quality in 1997 when they introduced Serre Nuove dell’Ornellaia, a second wine, also a Bordeaux-blend. At the same time, they introduced Le Volte, often misinterpreted as a third wine, which it is not. Le Volte, unlike Ornellaia’s other two wines, blends Sangiovese with Cabernet Sauvignon and Merlot, but like its stablemates has the same glossy texture, which is one of signatures of Alex Heinz, the winemaker. The 2019 is a bright and lively mid-weight wine, displaying a lovely combination of fresh cherry-like notes and a hint of earthiness. A touch of bitterness in the finish emphasizes that Heinz has taken care that it can stand on its own and that it’s not an overdone fruit bomb. Unlike Serre Nuove and Ornellaia itself, the 2019 Le Volte is ready for the dinner table now. - Michael Apstein

The 2019 Le Volte dell’Ornellaia is terrific. Bold, juicy and wonderfully expressive, the 2019 will drink well right out of the gate. Juicy black cherry, lavender, spice, menthol and chocolate are all kicked up a few notches. In 2019 Le Volte is especially dark and sumptuous, both of which add to its considerable immediacy and overall appeal. This is an especially fine vintage for the Ornellaia's entry-level bottling