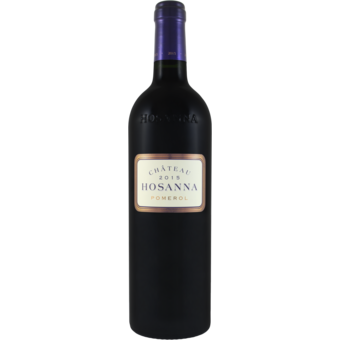 "Château Hosanna, a jewel-like vineyard of just 4,5 hectares, is located in the heart of Pomerol’s central plateau, adjacent to some of the most illustrious crus of the appella...

“A monumental wine is the 2015 Hosanna and it’s 82% Merlot & 18% Cabernet Franc raised in (I suspect) all new barrels that’s from a single parcel of older vines. One of those rare wines to pair incredible opulence with off the charts elegance & purity, it’s up with the top handful of wines in this vintage & readers should do whatever they can to taste this beauty. Loaded with notions of blackcurrants, black raspberries, toasty oak, truffles, graphite, & spice-box, it hits the palate with full-bodied richness, an ethereal, seamless texture, perfect balance, & a huge finish. It’s unquestionably one of the superstars in the vintage & should last for 25-30 years. Hats off to the Moueix team!”

“This has the wow factor; it’s very impressive. The nose is saturated with dark, rich plums & wet-earth aromas, not to mention the roasted-coffee & crushed-violet undertones. The palate has polished, lustrous appeal, & dark plums & ripe blueberry flavors abound. Long, deep-set tannins with incredible depth. This has x-factor depth and elegance. Best from 2025.”

"A blend of 82% Merlot and 18% Cabernet Franc, the 2015 Hosanna had a medium garnet-purple color, charging out of the glass with an exotic perfume of smoked meats, truffles, sandalwood and Indian spices over a compelling core of cherry cordial, blackberry tart and blueberry compote plus suggestions of garrigue and rose hip tea. The full-bodied palate is absolutely laden with taut, muscular black and blue fruits, with a solid frame of grainy tannins and just enough freshness, finishing with languidly lingering licorice and spice flavors. Incredibly seductive and just plain delicious right now, hedonists can enjoy this captivating wine while it’s relatively young, while traditionalists can wait ten years and drink it over the next 25 years or more."

"This wine with its dense & dusty tannins has considerable power as well as concentration. The small 10-acre vineyard has produced a wine packed with both tannins & luscious black fruits. Acidity complements all this richness with its own freshness & balance. Drink from 2027."

"4ha vineyard. Powerful but subdued. Masses of dark fruit on the nose – blackcurrant to the fore. Huge depth on the palate backed by abundant tannins that are finely polished with no aggression. Freshness & enormous length on the finish."

"Château Hosanna, a jewel-like vineyard of just 4,5 hectares, is located in the heart of Pomerol’s central plateau, adjacent to some of the most illustrious crus of the appellation: Château Lafleur to the north; Château Petrus to the east; Château La Fleur-Pétrus to the west; Vieux Château Certan to the south.

The vineyard of Château Hosanna has a long and rich history. Prior to its purchase by Ets. Jean-Pierre Moueix in 1999, Hosanna was known as Château Certan Giraud, considered one of the premier crus of Pomerol since the 1950’s. It was originally part of the de May family estate, who settled on Pomerol’s plateau in the 16th century and planted one of the appellation’s first vineyards there.

Only the highest plateau parcels of its previous incarnation were selected to form Château Hosanna. The vineyard enjoys a terroir of red gravel and clay on "crasse de fer" which is known for producing wines of great elegance, complexity, and power. Old Cabernet Franc vines, a significant portion of which date back to 1956, contribute a unique complexity to the cru.

A marriage of intensity, purity and balance, its silky touch has led some to describe Hosanna as the feminine counterpart to Trotanoy." - Importer