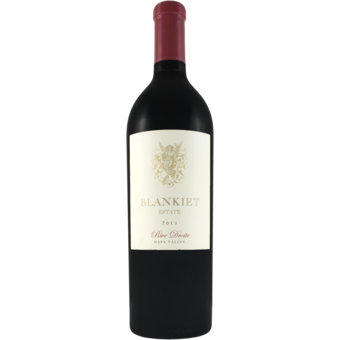 "Blankiet’s 2011 Rive Droite Paradise Hills Vineyard is a pretty, if somewhat small-scaled wine laced with sweet red berries, crushed flowers and spices. There is excellent acidity and brightness in the glass, not to mention terrific overall balance. Floral notes reappear on the finish, adding lift and freshness. This harmonious, feminine wine could very well be one of the surprises of the vintage. The blend is 92% Merlot and 8% Cabernet Franc. Anticipated maturity: 2015-2026.

Claude and Katherine Blankiet have spared no expense in their goal to make world-class wines, and it shows in these magnificent new releases. One of the biggest changes at Blankiet over the last few years has been the creation of a second wine, Prince of Hearts, first released with the 2008 vintage. It doesn’t take a genius to figure out that the creation of a second label is one of the main reasons quality has been so exceptional here, especially in the last few years, none of which has been easy. Prince of Hearts, with its production between 600-1,000 cases, is all or mostly juice that used to end up in the Rive Droite and Proprietary Red. Readers who want to learn more about Blankiet might like to take a look at my videos of the 2011 and 2012 harvests. The differences between the 2009s and 2010s are striking. Some of that – perhaps much of that – is attributable to the qualities of the years themselves. Claude Blankiet describes 2009 as a warmer vintage than 2010 and certainly 2011. The 2009s were made by Michel Rolland, but the blends were finalized by Denis and May-Britt Malbec. Since their arrival, the Malbecs have lowered toast levels in the cellar, and perhaps most importantly of all, brought with them an approach to viticulture that seeks to stress the vines less than was previously the norm here. Changes in farming normally take at least a few years to show results, so it follows that it will take some time before the full potential of these vineyards are fully realized."