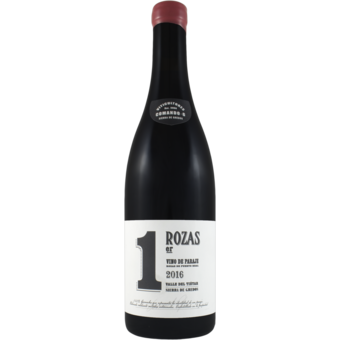 "Superb aromatic complexity. Beautifully caught ripe strawberries, cherries and raspberries with fragrant and exotic violets and roses. A very juicy, fleshy and engaging texture. The tannins fold out in sheets and make for very compelling freshness and length. Drink or hold."

Comando G is Daniel Jimenez-Landi's latest project with fellow oneology cohorts, Fernando Garcia (Bodega Maranones) and Marc Isart (Bernabeleva). They say that they met each other in class, but there are witnesses who say that they actually met the bar of the University. It was 2005 and they were studying oenology and viticulture. Three years later in 2008, they started Comando G out of friendship and passion. They are resolute in creating the best Grenache wine, capturing and expressing the terroir of each individual parcel they cultivate.

Their vines are rooted in predominately granite soil vineyards at an elevation of at least 3000 feet and are between 50 and 80 years old. Comando G was the name used in Spain for one of those Japanese cartoon series of the 80s, where some kids were kind of super heroes. They thought of themselves as the Comando G (Comando Garnacha, in this case), where their mission is to make the best Garnacha in the world. Since January 2013, Marc left to focus on his work at Bernabeleva and his family, while Daniel and Fernando continue the Comando G mission on their own. This is now their main project and where they are investing in their focus. They seem to go from strength to strength and are getting closer to their goal with some of their wines achieving world-class status! This is one of the most exciting new projects, not only in Gredos, but in the whole of Spain!" -Importer