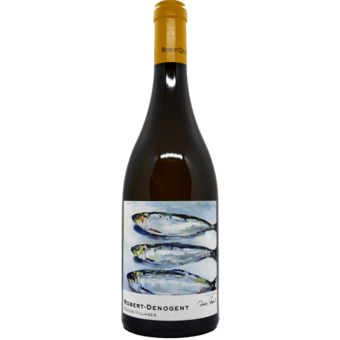 "When first tasting the wines of Domaine Robert-Denogent, it is essential to put aside any preconceived notions about the young, over-cropped whites of southern Burgundy. These...

"A cuvée that incorporates lots of fruit from the commune of Verzy, the 2020 Mâcon-Villages Les Sardines delivers aromas of orange oil, baking spices and white flowers, followed by a medium to full-bodied, ample and lively palate, concluding with an intense, sapid finish. It's easy to see why it's a favorite with many of the region's best restaurants."

"When first tasting the wines of Domaine Robert-Denogent, it is essential to put aside any preconceived notions about the young, over-cropped whites of southern Burgundy. These are wines of a much different class, whose reflection of terroir is one more likely found farther north in the prestigious Côte d’Or. Jean-Jacques Robert took over five hectares of his grandfather’s vines in the Mâconnais just outside the village of Fuissé after finishing law school in 1988. Though most of the harvest had always been sold off to the cooperatives, the small parcels that made up the domaine were already understood to enjoy unique microclimates, producing Pouilly-Fuissés of great pedigree. Jean-Jacques soon came under the influence of two ardent defenders of terroir, the great master of Morgon, Marcel Lapierre, and American importer, Kermit Lynch. Little by little, Jean-Jacques has introduced radical changes to the domaine (while staying faithful to his grandfather’s wisdom about the complexity of the land), finally realizing its full potential. He is now joined by his son, Nicolas.

The Roberts’ individual vineyard parcels are planted with old vines (remarkably so!) on varied soils of granite, schist, limestone, clay, and gravel. Naturally reduced yields imbue the grapes with terrific concentration. The wines undergo a long, slow élévage in barrel that lasts anywhere from fifteen to eighteen months. They are bottled after two winters in barrel, a treatment more common (yet still far from the norm) in the Côte d’Or, and something that really sets them apart in the Mâconnais. At a fraction of the price of the appellations of Meursault and Puligny-Montrachet, to which they are often compared by aficionados and critics alike, the wines of Robert-Denogent offer tremendous value, wonderful richness, and impressive complexity. An added attraction for some—they age sooner than their counterparts to the north." - Importer (Kermit Lynch)