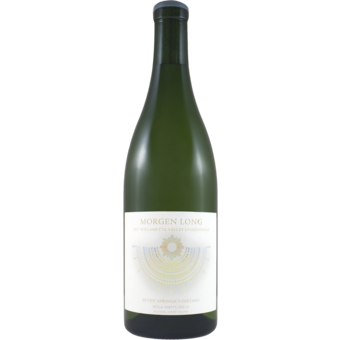 "There is a subtle richness to the Seven Springs Vineyard, as vivid aromatics of fresh lemon curd, key lime, golden florals, and minerals are warmed with fine-grained wood spic...

"There is a subtle richness to the Seven Springs Vineyard, as vivid aromatics of fresh lemon curd, key lime, golden florals, and minerals are warmed with fine-grained wood spice. The palate is dry, with bright acidity and flavors of mixed citrus, golden apples and ginger brioche. There is density to the flavors and fine texture as the wine finishes mineral and long.

Eola-Amity AVA. I am grateful to lease an acre of mixed Dijon clones (95 and 76) from two blocks at Seven Springs Vineyard, which face southeast at 500’. The South Block has the tightest spacing of any site I work with. It is easily one of the most iconic vineyards in the Willamette Valley, and for good reason. Seven Springs is farmed biodynamically by Jessica Cortell’s Vitis Terra outfit. It is a pleasure to work with the non-irrigated vines here, which are on rootstock in volcanic basalt soils." -Morgen Long, Winemaker

"Winemaker Seth Morgen Long, after fifteen years of experience in the restaurant industry, began studying wine with sommeliers. In 2009, he began assisting winemakers in the Willamette Valley and by 2011, he was traveling to Central Otago in New Zealand and the Santa Cruz Mountains of California. In 2012, he went to the Côte d'Or of Burgundy where he worked at Domaine de Montille, where he remained through their 2012 AND 2013 vintages.

Seth is unique among Oregon winemakers in that he specializes in Chardonnay, using the old traditions he learned in Meursault. The wines are fermented and aged in French oak barrels, without addition of yeast, water, sugar or acid." -Importer