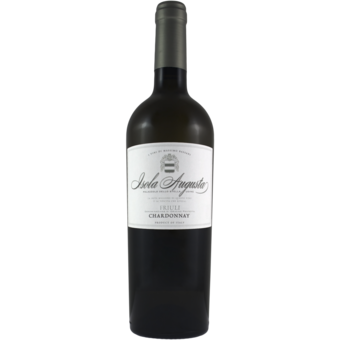 "This excellent, easy drinking Chardonnay is an outstanding find that we have a feeling will turn into a huge hit. Medium to full bodied with good concentration of fruit. Notes...

"This excellent, easy drinking Chardonnay is an outstanding find that we have a feeling will turn into a huge hit. Medium to full bodied with good concentration of fruit. Notes of melon and apple on the nose. Great balance. A stunning find for California Chardonnay fans as the price here is far less than what you would expect. Compare it to many other Chardonnay offers in the $25+ range and you will see why!"

The farm Isola Augusta is property of Massimo Bassani and covers an area of 74 hectares between the Tagliamento and the Stella river. More precisely, it is located in Palazzolo dello Stella (UD) in Friuli Venezia Giulia (Italy). The farm has always been trying to reduce the impact on the environment of its activities, and it has recently made a further effort on this way, taking the best and advanced technologies: a photovoltaic power system has been installed on the roof and it supplies electricity to all the farm's facilities respecting the surrounding environment; a geothermal heating system and a wine production system which is very advanced and eco-friendly. For these reasons Massimo Bassani has chosen this pay off "Naturalmente Isola Augusta" (which can be translated as "Naturally Isola Augusta") to represent his philosophy of life, production objective and determination for a healthier world.

Renzo Bassani, Massimo's father, had the idea to produce high-quality wines in the 50s when he bought this property which had been founded in 1861. It was already located in Palazzolo dello Stella and its name was "Isola Augusta". At the beginning he bred cows, there were milking machines and the milk was made into cheese in a small cheese factory and then sold with the farm’s logo. Later he found under the sand some bottles of wine which had been hidden by the sharecropper and after having tasted their contents he decided to start wine production. After the second flood of the Tagliamento decimated the cows, Renzo believed it was fate: he gave up cattle-breeding and began producing high-quality wines. Renzo Bassani's project was to control every phase of the production, from the grape wine growing to the bottling in order to show he didn't cultivate grape wine just to sell it. In the '70s Luigi Veronelli, a journalist who determined the growth of the popularity of the Italian wines, and who has later become a good friend of the family, "receiving some bottles of wine to taste and to judge, answered writing on an important newspaper, giving to our wines excellent marks" says Massimo Bassani, in an account to Ercole Gino Gelso. Today, he thanks his father for this little but valuable jewel he inherited, and which he began to devote himself to in 1972, when he was studying at university to get a degree in law. Massimo Bassani, the present owner and farm's production responsible, in an interview given to Francesco Antonini for the review "Friuli da bere", says: "My father came from Venice, and he was an insurer. He had been the president of important companies in Trieste [...]. Land and wine were his passion, then, one day he visited Isola Augusta and got charmed". At the entrance of the farm there is the pay off "Vinovivo".-Winery