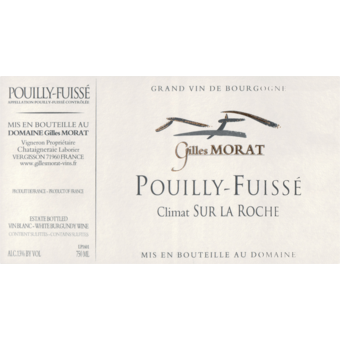 "The Pouilly-Fuissé Sur La Roche comes from a one-half hectare parcel of vines averaging 40 years of age situated on stony, limestone soil under the rock outcropping of Vergiss...

"Rich while also freshly fruity, this is a delicious wine. In addition to fruit, it has a strong texture with minerality and acidity equal components. Drink this wine from 2019."

"The Pouilly-Fuissé Sur La Roche comes from a one-half hectare parcel of vines averaging 40 years of age situated on stony, limestone soil under the rock outcropping of Vergisson. The protected location, exposed to the south-east, allows for remarkable ripening; indeed, plant species are found here that are otherwise only in southern France. At an altitude of about 400 meters, the highest in the village, the vines are not affected by morning fog; rather they absorb all the heat of the day, which is relieved by cool nights. The high altitude helps preserve the wine acidity and freshness. Sur La Roche cuvée is fermented and aged 100% in oak casks, of which 12% are new and the balance equally divided between 1-7 years of age, for 12 months. Morat stirs the lees once every two weeks and regularly tops-up the barrels to ensure freshness. Malolactic fermentation takes place spontaneously in barrels, usually beginning in the Spring. This cuvée has an exceptional texture: intense, taut, rich and long with notes of smoke, green apple, citrus and minerals, while positively in the house style of purity and finesse.

Gilles and Joëlle Morat founded Domaine Gilles Morat in Vergisson in 1997. Gilles’ father and grandfather owned vines in Vergisson but had always sold their grapes to negociants. After 15 years in the electronics industry, Gilles decided it was time to move back to his home town so that his children would be able to enjoy the same life that he had while growing up. After spending one year in wine school in Davaye, Gilles combined his father's vines with additional parcels and began his new domaine. The winery is located high in village of Vergisson on a site known as “Châtaigneraie-Laborier” which denotes a 19th century plantation of chestnut trees (châtaignes) by a certain Monsieur Laborier. Morat chooses to keep the size of his domaine small (6 ha) so as to maintain an artisanal dedication to his vineyards and winemaking, while allowing the terroir of Vergisson to find full expression in his Pouilly-Fuissé cuvées.

From the outset, Gilles’ vision was to bottle the majority of his production and make wine in the elegant and pure style which has become his hallmark. After some experimentation, Gilles found two local barrel makers who could provide him with the type of French oak barrels from the Allier and Cher forests that would enhance the style of wine he sought. The soil and site specific cuvées of Bélemnites and Sur La Roche were launched in 2001.

The Morat’s vineyards are all on the steep, east-facing amphitheater slopes of the commune of Vergisson, which is the very heart of the Pouilly-Fuissé appellation. The famed Roche de Vergisson is the defining landmark of this region, with the Roche de Solutré forming the southern limit of the cirque or amphitheatre. The altitude of the vineyards is a very high 300 to 450 (for the Sur La Roche cuvée) meters. The soils are a mixture of clay and limestone, and vary in exact composition from parcel to parcel, a factor that adds complexity to the wines.

Farming/vinification practices: Certified Organic. Only when needed, minimal levels of organic fertilizer are applied. Gilles hand-plows the rows regularly, with different tools according to the season, and manually removes the grass directly under the vines. Morat avoids problems on the vine by pruning strictly to keep yields low, constantly checking his vines during the growing season and using minimal copper-sulfite treatments only when needed. Harvesting is all done by hand at optimal maturity, with careful selection in the vineyard. The wines are raised entirely on their lees in barrels for 10 to 12 months. Alcoholic fermentation takes place in the barrels, and the wine is kept on its lees, which are periodically stirred to enhance flavor and nuance, throughout the elévage. Gilles Morat prefers Allier and Cher oak from the center of France for its fine texture. Bottling usually takes place just before the new harvest." -Importer