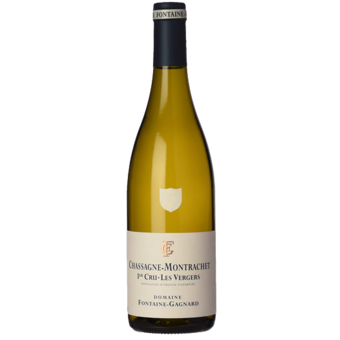 "Domaine Fontaine-Gagnard is one of the finest and most important producers in the village of Chassagne-Montrachet. The domaine has its origin in the fine Gagnard-Delagrange ho...

"Light yellow. Ineffable aromas of lime leaf, white flowers, menthol and powdered stone. Silky and sweet but with lovely citrus lift to its crushed stone and mineral flavors. A juicy rather than thick 2015 with strong but harmonious acidity. Finishes saline and classically dry, with a light touch."

"Domaine Fontaine-Gagnard is one of the finest and most important producers in the village of Chassagne-Montrachet. The domaine has its origin in the fine Gagnard-Delagrange holdings of forty-five years ago, as the vineyards hail from the marriage of Richard Fontaine to Jacques Gagnard’s oldest daughter, Laurence Gagnard, in 1982. The Gagnard family has always been very closely-knit, and much of the vineyard work amongst the various branches of the family continues to be done together. Céline Fontaine makes a bevy of fine wines from his excellent holdings in Chassagne-Montrachet, as well as examples of two of the finest Côte de Beaune reds: Volnay “Clos des Chênes” and Pommard “Rugiens”. But the heart and soul of Domaine Fontaine-Gagnard is their Chassagne-Montrachets, of which they own a fine clutch of premier crus and vines also in the grand crus of Criots-Bâtard-Montrachet, Bâtard-Montrachet and Montrachet itself.

The style of the wines at Domaine Fontaine-Gagnard is for intense, racy, deep and complex Chassagnes that start out life classically balanced and accessible, but always with fine expressions of terroir and the underlying structure to age gracefully as well. The wines are always focused and detailed, and are generally aged in about a third new oak for the premier crus and a bit more for the grand crus. Céline Fontaine makes a very good Chassagne villages which is not to be overlooked, but the real fireworks begin with the premier crus. The range of Fontaine-Gagnard premier crus is quite similar to those of Michel Niellon. There is Chassagne “Clos St. Jean” that is always the most forward of the premier crus and quite popular on wine lists, due to its early appeal. There are holdings as well in Chassagne “Maltroie” and Chassagne “Vergers” that are generally a bit more structured than the Clos St. Jean, and will reward at least a few years bottle age, and have no difficulty aging for fifteen to twenty years in a top vintage. The top two premier crus in the Fontaine-Gagnard lineup are their Caillerets, (whose very chalky soils typically produce the longest-lived premier cru in the domaine’s portfolio) and their dramatic and always superb la Romanée. The domaine also has a rare holding in the tiny vineyard of Chassagne “Grande Montagne”, which is located in the heart of the band of the best Chassagne premier crus at the top of the slope that includes Virondot, Grandes Ruchottes, la Romanée and Caillerets.

Amongst the grand crus, Domaine Fontaine-Gagnard has one of the largest pieces of the smallest grand cru in the Côte de Beaune, their beautiful Criots-Bâtard-Montrachet. Clive Coates has termed the Fontaine-Gagnard Criots “one of the very best sources for this tiny grand cru.” There is always a touch of exotic complexity in Criots, as it offers up lovely spice elements and an almost “salty” nuance to go along with the layers of apple and pear fruit and fine base of chalky minerality. Céline Fontaine also makes an excellent example of Bâtard-Montrachet (one of the raciest and most minerally-infused Bâtards), and a small slice of le Montrachet itself. The red wines here are not to be overlooked, as there is a sturdy and age-worthy Chassagne-Montrachet rouge, as well as the aforementioned and consistently fine Volnay “Clos des Chênes” and Pommard “Rugiens”. All in all, Domaine Fontaine-Gagnard is one of the very best in Chassagne-Montrachet, and a consistently excellent source that we strongly recommend discovering." -Importer