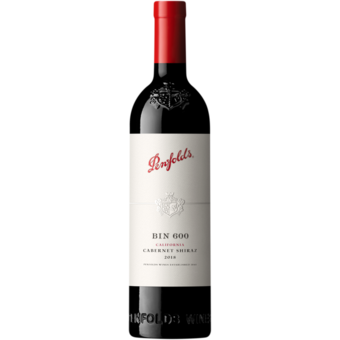 This is a blend of 78% Napa Valley and Sonoma-grown Cabernet Sauvignon and 22% Shiraz from Paso Robles. It is a smooth and earthy wine that offers flavors of leather, earth, iron and crushed rock cut against herbal accents.

A very fine and polished red with cherry, berry, chocolate and cedar aromas and flavors. Some spice and meat with hints of tea leaf. Some ash, too. Medium body and extremely refined texture, showing real balance and elegance. The tannins spread across the palate in a beautiful way. 78% cabernet sauvignon and 22% shiraz. Drink or hold

It’s a brassy move to indoctrinate Californian fruit with a strapping Aussie identity, in a Cab-Shiraz clearly fashioned to fit the Penfolds' mould. The addition of 22% Shiraz brings warmth and plum pudding generosity to the mid-palate, a warm embrace of firm red fruits that is both bold and cohesive. An arresting nose presents lifted spice notes – clove, allspice and nutmeg – along with a shaving of cedar wood, while the assertive oak influence and biting tannins speak with a boisterous Australian accent rather than a Californian drawl.

The 2018 Cabernet Shiraz Bin 600 is the entry-level wine in this new range from Penfolds. Bold and racy to the core, the 2018 possesses terrific richness and tons of allure. Blackberry jam, dried flowers, espresso, licorice and leather build in a sumptuous, opulent wine that will be very easy to drink upon release. The blend of 78% Cabernet Sauvignon and 22% Shiraz from sites in Napa Valley, Sonoma and Paso Robles works so well here. It spent 16 months in American oak, 40% new.” - Antonio Galloni, February 2021

This 2018 Bin 600 is the first release of this new Penfolds California label. It is a blend of two different regions and two different varieties: 78% Cabernet Sauvignon from Napa Valley and 22% Shiraz from their vineyards in the Camatta Hills area of California Central Coast (about 15 miles east of Paso Robles). The interesting twist to the story behind this wine is that Block 10 in the Camatta Hills vineyard was planted in the late 1990s with Shiraz cuttings from two of Penfolds's most iconic South Australia vineyards: Magill Estate and Kalimna vineyard. This is the Shiraz component. "So," Peter Gago told me, "this has been a project in the making for a long time. We see this project as a continuation—making wine through a Penfolds lens, but made in California."

NOSE: Spices waft – clove, sage and turmeric are in immediate suspension. Conversation diverts to cold coffee grounds, raw coconut kernel and jasmine tea. Fragrant salsa verde is dissected down to its components: flat leaf parsley, anchovy and basil. Oak provides a platform for these two varietal blending companions, a springboard for the blackberry and quince.

PALATE: Medium-bodied: as intended. Sweet liquorice, brimming with potent aniseed forms the flavor backbone and contributes to the glycerous texture. Radiating from this backbone is pepper-rubbed pastrami, rare roast beef, cocoa dusting, semi-dried dates and freshly harvested persimmons. An open textural weave – easily identified as shiraz-driven given 175+ years of history with this variety. Familial yet inaugural!