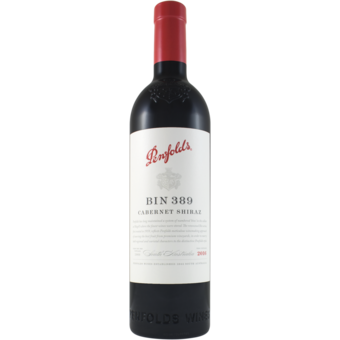 "Bin 389 is often referred to as ‘Baby Grange’, in part because components of the wine are matured in the same barrels that held the previous vintage of Grange. First made in 1...

"The 2016 Cabernet / Shiraz Bin 389 is a blend of 51% Cabernet and 49% Shiraz, the least amount of Cabernet you'll ever see in this bottling. It's dark and stolid, with notes of cassis and blackberry along with touches of vanilla and cedar. Full-bodied and dense, it's firmly in the Penfolds style and the style of this particular bottling, which always ages well, even if it's not the flashiest or most flamboyant offering from Penfolds. At more than 14,000 cases for the United States, it should be relatively easy to find."

"Bin 389 is often referred to as ‘Baby Grange’, in part because components of the wine are matured in the same barrels that held the previous vintage of Grange. First made in 1960, by the legendary Max Schubert, this was the wine that helped to forge Penfolds solid reputation with red wine drinkers combining the structure of Cabernet Sauvignon with the richness of Shiraz. Bin 389 also exemplifies the judicious balance of fruit and oak.

Nose: An immediate ascent of scent – no need to wait or to vigorously swirl this wine to tease out ‘what lies beneath’! Dark berry fruits consistent to both varietal persuasions, (cabernet and shiraz), overtly courted by elements of ponzu, soy, sesame and dried shiitake mushroom. Senses are easily conveyed to a forest after rain – wet bracken, liberated mulch, damp soils. Naturally (new and used) oak plays a (minor) role in this fanciful aromatic romp.

Palate: Flavours and textures akin to marbled Kobe beef and an earthy accompaniment of black liquorice root and anise. Structurally bold with little protruding – integrated, fine … and has comfortably already “settled into place”. ‘Appetising’ acidity – a non-intrusive and refreshing granita-like bite/attaque. Assam tea maltiness and tannins merge with impressions of wet slate, pencil lead/graphite … no doubt somehow linked to earlier partial barrel fermentation and oak maturation. Needs time, as per most Bin 389’s at release. Perhaps a little longer for this vintage? Our recommendation – your choice." - Winery