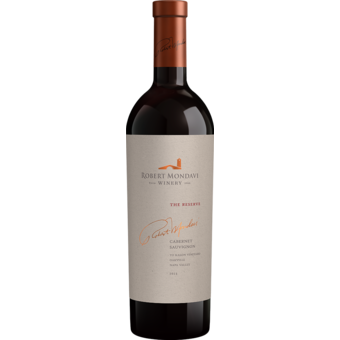 The complexity, power and sophistication of fruit from our To Kalon site, considered a grand cru among Napa Valley vineyards, is on full display in this vineyard-designated Res...

"From the most coveted blocks within To Kalon - the treasured vineyard of Robert Mondavi that was the location of his winery home since 1966 - this is the fourth vintage of the To Kalon-designated Reserve. Like a classic rock 'n' roll tune from that era, this wine ranks among the most revered and will continue to be memorable for decades. Among the top five songs of 1966 were "Cherish" by The Association and "Soul Inspiration" by The Righteous Brothers, which are appropriately a good fit for describing the To Kalon vineyard. From its aromas of dark cherry and vanilla spice to its deeply expressive notes of graphite, leather, plum, and earth, the velvet drapes across the palate from start to finish." Publisher's Pick, The Tasting Panel, December 2017

"Deep ruby/purple-colored, notes of sweet crème de cassis, blackberry, charcoal and toast are present in the subtle but intense aromatics. The wine is full-bodied and classically crafted, building incrementally on the palate and displaying full-bodied richness, sweet tannin, and a potential to age for 25-30+ years. This is a beauty. It goes without saying that probably no one did more for the image, the quality and the prestige of Napa Valley than Robert Mondavi. He was ‘the’ ambassador for the region, and while he certainly lived to see its rise to glory and fame, I doubt that even he envisioned the remarkable wines that are now emanating in prolific quantities from this Shangri-La for growing grapes." Robert Parker - The Wine Advocate, December 30, 2016

The complexity, power and sophistication of fruit from our To Kalon site, considered a grand cru among Napa Valley vineyards, is on full display in this vineyard-designated Reserve, with sweet dark cherry and richly concentrated blackberry fruits, a savory, earthy complexity, and toasty oak, vanilla and spice which lingers through the luxuriously long finish.This is the fourth vintage of our To Kalon Vineyard-designated Reserve. When Robert Mondavi chose the To Kalon Vineyard in west Oakville as the home for his new winery in 1966 he remarked that, “It was a vineyard with a distinguished history and a magical nature. Ideal soils, sunlight, and rain—to my eye, the vineyard was a treasure.” Those sentiments were re-confirmed when the To Kalon Vineyard was named the Vineyard of the Year by the California State Farm Bureau in 2011. Our Reserve is blended from the finest blocks within To Kalon.