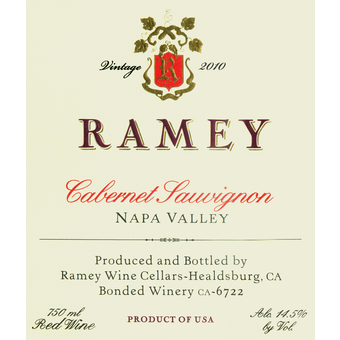 "Ramey’s 2010 Cabernet Sauvignon is a spherical wine with all of its elements in place. Mocha, espresso, blackberries, incense and graphite all come together in a wine that impresses for its exceptional overall balance. White flowers, cloves and asphalt all develop later, lending an element of exoticism that is simply compelling. The 2010 is a blend of valley floor and hillside fruit. Anticipated maturity: 2016-2030.

Once again, I tasted an amazing range of wines with David Ramey. The Chardonnays capture a beautiful middle ground of ripe, California fruit but treated to a long, Burgundy-inspired elevage that relies on natural yeasts and no filtration, among other choices, to bring out the personality of each of the sites Ramey works with. To me, the Ramey Chardonnays have a Chassagne-like richness that is quite appealing, yet they remain laid back in style by California standards. The Cabernets run the gamut price-wise, but I find a lot to like across the entire range. The Syrahs are in some ways the outliers, because they are made by a winemaker with a very Cabernet-influenced palate. As good as Ramey’s Syrahs are, it is impossible not to notice a house style that emphasizes an overt expression of fruit over what might be termed more varietal character, especially in the regular bottling. As for the reds, the 2011 Cabernets are quite strong for the year. In 2011, Ramey bottled a far greater percentage of his juice into the entry-level Claret than normal, and saved only the best lots for the Cabernets, a decision that has paid off handsomely. The 2010s are just as fabulous as they were last year. At the end of the day, though, that is a relatively small critique for a winemaker who excels in so many ways. In my mind, Ramey is one of the top wineries in the United States. Readers who aren’t familiar with these wines owe it to themselves to check them out."