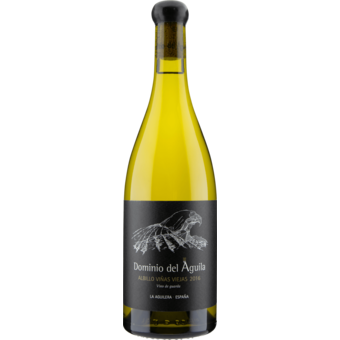 "Albillo is a catch-all name for a diverse collection of white grape varieties in Spain. Due to the fact that the name derives from the Spanish word for white, Albillo can diff...

"The white from Dominio del Águila is one of the first whites from the Ribera del Duero appellation, which just approved the category in September 2019. It's also one of the finest whites from the region (and from Spain), used by the appellation to present the new category of wines as an example of the aging potential of the style, which at this address was produced in 2012, 2014 and 2015 and until now sold as generic Vino de España. The fourth vintage bottled is this 2016 Blanco, which is insultingly young and backward, with incredible tension, 13% alcohol and a pH of 3.08, which is only achieved in cool vintages, and crafted as the best white Burgundies, as it's produced with the idea of a true vin de garde. This 2016 took almost two years to complete fermentation, because it ferments in oak barrels in a very cold cellar. This is the finest vintage, with citrus notes, hints of smoke and incredible tension and freshness in the palate. This has the tenderness of a baby and should have a slower development than any of the previous vintages. It was hand bottled—unfined and unfiltered after 32 months in barrel—into 4,855 bottles and 80 magnums in June 2019. These are wines that deserve being revisited a few years after their bottling..."

"Albillo is a catch-all name for a diverse collection of white grape varieties in Spain. Due to the fact that the name derives from the Spanish word for white, Albillo can differ from region to region, and can even be used for different varieties within a single D.O.! In Ribera del Duero, where white wines are not recognized under D.O. rules, there are several ancient varieties that are called Albillo. Jorge makes it simple however – he only selects Albillo with small clusters and a deep golden color when ripe to make his Blanco." -Importer