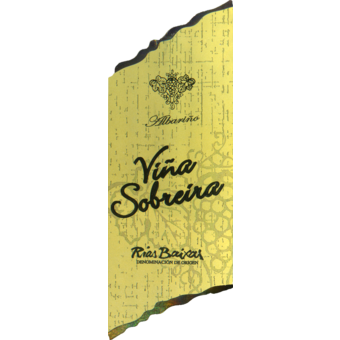 "Brighter and more mineral driven than the 2013, but yet retains beautiful tropical notes and very well rounded. No oak, 100% stainless steel from 40-50 yr old vines. "It is...

"Brighter and more mineral driven than the 2013, but yet retains beautiful tropical notes and very well rounded. No oak, 100% stainless steel from 40-50 yr old vines.

"It is a family-run Winery, was born in the bosom of the Salnés Valley taking its first steps in the year 1990. From its origins it opted for producing wines of great quality. It is in the bosom of the Board controller of the DENOMINATION of origin "RÍAS BAIXAS". In one of the slopes of the Valley of Salnés, are a few vineyards dedicated to grape Albariño, with an area of six hectares approximately and distributed in the form of parral. These vineyards are the germ of Viña Sobreira, winery which began in the year 1992, and which thrives on them in addition to the of hundreds of winemakers from the own environment, initially taking a familiar character, being currently processed in modern facilities which combine the artisan tradition with new winemaking techniques demanded by modern times and legislation.

The winery, in addition to the rigorous controls of its quality controller board, performs its own controls, from the selection of grapes during harvest up to its entrance prior and after each filling.

In addition to the own vineyard, counts with the collaboration of more than 100 growers in the area, that advised by technicians of the winery, supplied grapes with superior quality, which is the policy of the winery: "VIÑA SOBREIRA" -Winery