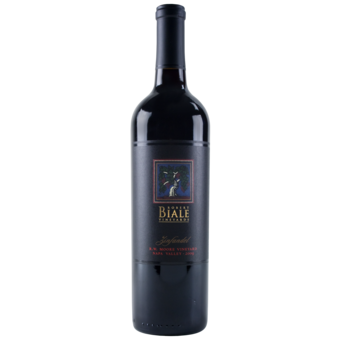 "Loaded with blueberry and huckleberry fruit, this offers accents of toasty vanilla and brown spice. The flavors are rich and ripe but balanced, and the tannins bring a note of fresh pepper. Drink now through 2016." 91 Points - Wine Spectator

WINERY:
"The Biale family, immigrants from Northern Italy, began growing grapes in Napa in the 1930’s – Zinfandel only. Zinfandel, California’s adopted grape, was widely planted by immigrants throughout the State’s history as a highly flavorful red grape well-suited for the climate. Each harvest, the Biale’s fruit was routinely sold for bulk wine. For decades before the global demand for Napa Valley wine, one winery, the Napa Valley Co-Op winery, processed almost half of Napa’s grapes. Before big companies moved in, most of Napa’s fruit was grown by local farmers like the Biales. In fact, prunes and walnuts were as valuable as grapes in those days, and the Biale farm produced its share along with eggs and vegetables."

"Committed to the tradition of farming grapes, the Biales decided in 1991 to form a partnership with the goal of producing a world-class wine from the oldest Zinfandel vines on the ranch. The team: Al Perry, winemaking; Dave Pramuk, Marketing; Aldo and Bob Biale farming. The wine, named after longtime farmer Aldo Biale, was called “Aldo’s Vineyard”.

The inaugural wine was a quantity of 400 cases produced from about 8 acres of 60-year-old vines. Now, twelve years later, Biale is recognized internationally as being among California’s very finest producers of Zinfandel. "Today, a family of wines of distinctly different personalities is produced, with the goal of capturing the ultimate expressions of their sites. Each wine is vineyard designated only in years when it is outstanding. Wines not grown on the Biale ranch are from grapes grown through farming contracts with small independent growers in Napa, Sonoma, Lodi and Contra Costa. In several cases, vineyards are parcels adjacent to the owner’s home. This involves the Biale/Perry tandem going beyond the normal “tons per acre” agreements to the extent of specifying farming techniques on each site and working personally with the growers to do the careful handwork necessary to ensure uniformly ripe and mature bunches of grapes. Good wines are made but great wines are grown."

"Biale’s richness, refinement, elegance and balance make the wines a memorable experience with a diverse range of food. And while the wines will age gracefully, Zinfandel is one of the best wines for drinking young."

This wine was also scored 88 points by the International Wine Cellar.