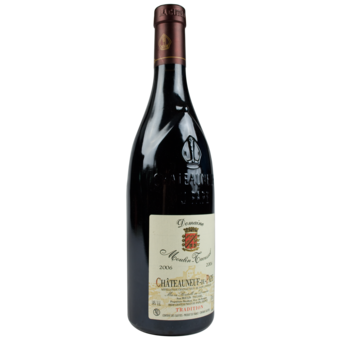 "This shows a solid core of dark fig and boysenberry fruit, but it's open-knit, with incense, mesquite and braised beef hints checking in on the back end. Drink now through 2018. 830 cases made." -90 points Wine Spectator

WINE:
"Henri Tacussel, a close friend of Baron Le Roy of Chateau Fortia, sold his estate Alberte and Robert Moulin in 1976. The Moulin-Tacussel cellars are located in Chateauneuf's town center. They started estate bottling their wine in 1985."

"Covering 7.85 ha (including 0.6 ha of white wine varieties), Moulin-Tacussel has 11 plots scattered across the appellation. They produce two red and one white Chateauneuf du Pape. The regular red Chateauneuf du Pape is made from 70% Grenache, 10% Syrah, 10% Mourvedre, and a 10% mix of Cinsault, Counoise, and Muscardin. The grapes are completely destemmed, and the is aged for 12 months in foudres and small oak barrels. The average age of the vines is 40 years old." -Harry Karis, the Chateauneuf du Pape Book

WINERY:
"Founded in 1976 by Anne and Robert Moulin, Domaine Moulin-Tacussel is an approximately 8 hectare propriety in Chateauneuf du Pape, a part of the original vineyard created by Henri Tacussel in the 19th century. The domain is planted with 7 red varietals and 6 in white...Since 2003, Didier Latour has been the vineyard manager and winemaker."

VINEYARDS:
"The average age of the vines is 40 years old. The soils are clay and limestone, with rounded pebbles. Fermentation is traditional. It starts with whole bunch fermentation and the must is in the tank for about a 3 week fermentation on the skins. During alcoholic fermentation, the temperature is kept around 25-28 degrees Celsius. The wine is pressed before malolactic fermentation, at which time it is put into barriques. The wine is aged for 12-14 months in oak barrels." -Winery; translated by KM

This wine scored 89 points by Robert Parker and 85-88 by Josh Raynolds of the International Wine Cellar.